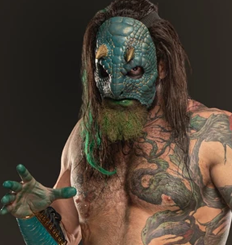 Luchasaurus pulled a hamstring moments before the match and Marko Stunt took his place with Jungle Boy. Rumor is that it is hamstring tear which could put him out of action for months.

PAC suffered a cut to his hand during his match last night. He grabbed the barb wire wrapped broom and bat from Jon Moxley and Kenny Omega. During the process he cut his hand and was bleeding all over the mat. No news of the extent of his injuries has been released.

The Semi-Finals will be held October 23rd.

Was the first AEW Wrestler to be Strapped To Stretcher courtesy of Pentagon Jr. earning him 25 points. Daniels was up walking around by the end of the show but may be sidelined for a while.

Added to the DropTheBelt AEW Roster

Rumor of Jon Moxley and Chris Jericho still having commitments to NJPW that may pull them from AEW Shows. They are expected for NJPW Wrestle Kingdom.

Kenny Omega has a AAA Match vs. Fenix on Saturday for the AAA Championship. Seems like some AEW Wrestlers are part of a massive talent trade between other major wrestling companies.

Took a beating from the Lucha Bros and shows it off proudly.

My boy got chopped up but held his own on #aewdynamite💥

A kid in the crowd was dressed as Orange Cassidy and Cody Rhodes gave him a birthday gift he will never forget.